Is it King’s Day or Queen’s Day?

Nowadays we celebrate King’s Day in The Netherlands. Our first King’s Day was in 2014, just one year after the abdication of the queen, now Princess Beatrix. If The Kingdom of The Netherlands has a queen, this day is called Queen’s Day, in case we have a king it’s called King’s Day.

Since April 30th, 2013 Willem Alexander is the King of The Kingdom of the Netherlands. That’s why the Dutch will celebrate King’s Day for the next decades. 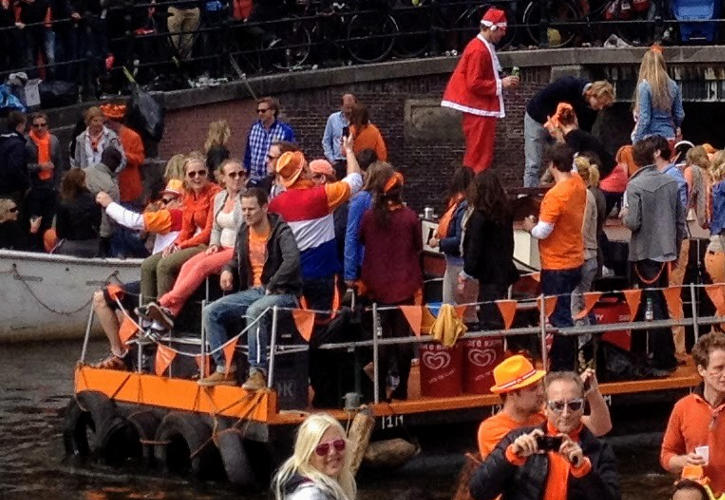 King’s Day is the birthday of Queen Willem Alexander. Queen’s Day, however, was not officially Princess Beatrix’s birthday, that is 31st of January. It was her mother’s birthday, Princess Juliana. At the time Princess Beatrix took over the throne from her mother, she announced Queen’s Day would be continued on April 30th. That made the Dutch people happy as well, celebrating Queen’s day during winter time wasn’t a promising perspective … 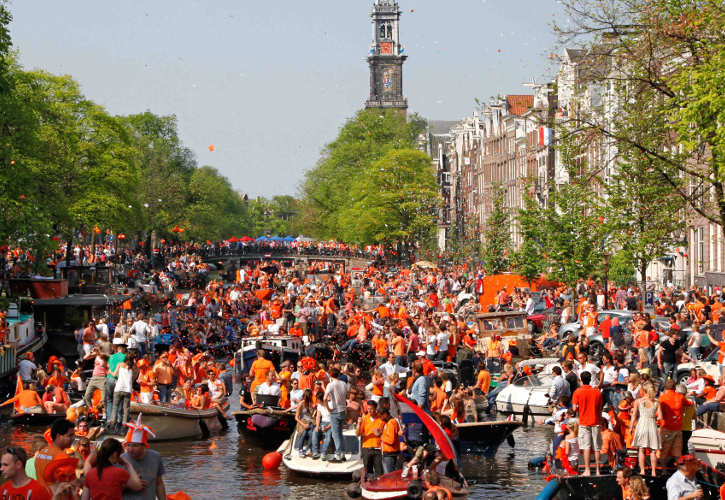 Party on the canals in Amsterdam

Why do the Dutch people dress in orange?

On King’s Day or major sports events, when the Dutch national team will play, people will dress in orange. The orange color is not on the flag, that is red/white/blue.

The reason for the orange color is the link with the Dutch Royal Family, it is in a part of their name: Prins(ess) of Oranje-Nassau (oranje is the Dutch word for orange). It is associated with the title ‘Prins of Orange’, a title originally associated with the sovereign Principality of Orange. If you want to read more about this, see the wiki page. 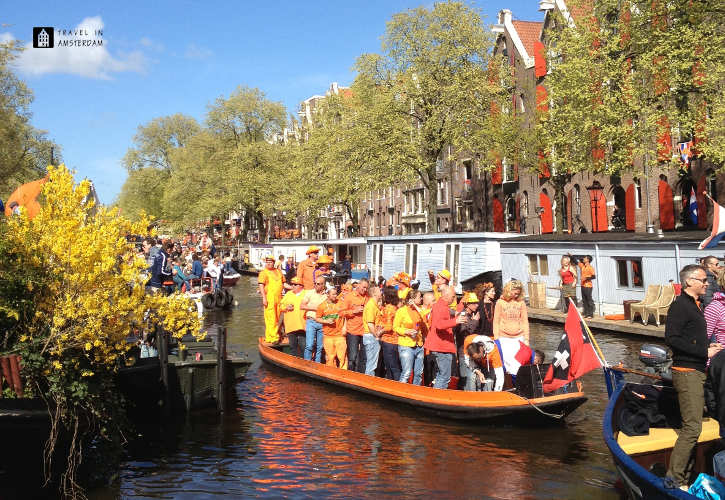 Two days a year Amsterdam get’s really crowded and that’s on King’s Day and the Canal Parade. During these days there is a huge vibe in and along the canals with music.

What’s on during King’s Day in Amsterdam?

Actually there are 4 major events:

King’s Day night is the night before King’s Day. Along the canals bars and restaurants have small band’s or DJ’s performing and people enjoy their drinks outside if it isn’t too cold 😉

The street market starts from early in the morning. Where? Everywhere! People sell their second-hand stuff on the street (tip: take some small cash money). Everything is sold, clothes, books, toys, DVD’s and so on. If you want a good spot, you need to get up early in the morning. Children are selling as well or performing, just to earn some money. There is a special ‘child market’ this day in the Vondel Park. And mind you, it can be very busy at the Vondel Park this day!

The festivities in and around the canals

This is Kingsday in Amsterdam – see the movie!

The dance festivals in and around Amsterdam

Major dance events take place in and around Amsterdam. DJ’s from the DJ Mag top 100 will perform. For these events, you need to order tickets in advance as these events will sell out.

For tickets and more information see the Loveland website.

See the after movie of Nassau Festival 2017:

For tickets and more information see the Nassau Festival website.

When: April 27, each year
Note:
– the city can get very crowded this day and a bit noisy due to all the festivities
– within the city center, public transport will not operate all lines
– taxi’s and cars are not allowed to enter the city center

If you arrive or leave Amsterdam on this day, make sure you can get to the airport on time or do count on delays in getting to your hotel.

Going to the movies

Going to the movies

Book your tickets in advance and avoid the queues!

Get our travel tips for Amsterdam

Once a month an update about our latest posts!